England Journal: Day Four. This was our second day in Liverpool, where the first of the two Coldplay “Hidden Gig” shows benefiting Crisis were held tonight. As noted in the prior journal entry, the “Hidden Gig” venue was not revealed until 24 hours before the show, and the venue announced was the Royal Court Theater.

With only one full day in Liverpool, I did not do too much sightseeing – just what was within walking distance of the hotel.

One of my best friends in the original prop collecting hobby, Simon Lee, lives about an hour by car from Liverpool, so he was able to drive out to meet for lunch.

As discussed in my podcast with Simon, he is a tremendous fan of the Die Hard films staring Bruce Willis. As a special treat, he brought along his prized possession – the original wallet used by Willis throughout the film in his role as John McClane. Of all the props I’ve seen over my years of collecting, I always marked this as one of favorites, as the original film is one of my favorites and it is a really key artifact from the movie, as it represents the intersection of McClane’s conflict as well as his motivation. As it ended up, the fourth Coldplay fan that was part of our group and was to have travelled with us was not able to make it to England for the first show due to all of the weather-related problems in both the U.S. and the UK. As an extremely generous gesture, she offered up her ticket to the concert to us to gift to a fan who was available to attend, so Simon ended up having an opportunity to see the show in her place, for which he was extremely humbled and honored.

Oz had made some very cool faux prop concert passes for the fictional “ZOMBAID”, as seen in the movie Shaun of the Dead. In the movie, Chris Martin and Jonny Buckland appear as themselves in support of the fictional charity concert. Oz made passes for our original group (himself, me, Carrie, and Amanda) as well as Chris and Jonny (Will and were killed off in the movie) and Simon Pegg, star of the film. So out of sheer coincidence, Oz had a “Simon” one made, which he gave to Simon to wear on our journey… Later in the day, we made our way to the Royal Court Theater and met up with some other Coldplayers we were acquainted with. Due to the cold and the fact that we had assigned seating, we decided to hang out with some other Coldplay fans and drink some hot chocolate at the Marriott across the street… The venue itself was small and intimate, as expected. Standing room only on main floor, then two upper balconies (we were in the middle section). There were a lot of band and band associates family members in the rows in front of us, and a number of celebrities more familiar to those who are native to England. I even took a photo of Simon with “football” player Steven Gerrard. The concert itself was awesome, as expected. They played a number of my favorite – Politik, God Put A Smile Upon Your Face, Death And All Of His Friends – as well as many of their biggest hits – Yellow, Clocks, Fix You, Viva la Vida. UPDATE: Below is a video of the “Christmas Lights” performance that closed the show, from the official Coldplay site (you can see Wisna from our dinner on Day Three appear in the video several times):

We met up with Mathieu and his sister Véronique from Belgium before and after the show, and he was able to get a cool handwritten list of shot instructions from the camera operator for the “Christmas Lights” video above. After the concert, I took some photos of Chris Martin leaving the venue and was able to get my ticket for the event autographed as well. During the show we spent some time talking with a couple from the U.S. who were sitting behind us at the show, and then ran into each other at the hotel afterwards, so we went out together for one of the only take out places open at the time and all shared a nice meal in the lobby of our hotel.

By the time I got back to the room and packed and prepared to leave for the train to Newcastle in the morning for the second show, it was 4:00 am and we were on a taxi heading to the train station by 5:30 am… Hopefully our friend in the states will be arriving in Newcastle by plane about the same time we arrive by train. 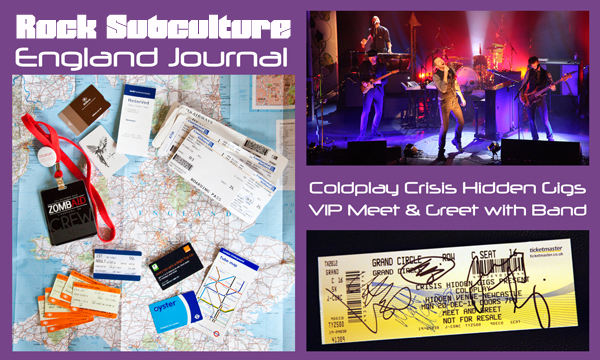