Julien’s Auctions has published the online catalog for their upcoming sale – “Property from the Estate of Les Paul”, which will be held at their Beverly Hills gallery on Friday, June 8th and Saturday, June 9th.

The sale includes property from the estate of the legendary Les Paul.  Below is an excellent synopsis of him from Wikipedia:

Lester William Polsfuss (June 9, 1915 – August 13, 2009)—known as Les Paul—was an American jazz and country guitarist, songwriter and inventor. He was the inventor of the solid-body electric guitar which made the sound of rock and roll possible. He is credited with many recording innovations. Although he was not the first to use the technique, his early experiments with overdubbing (also known as sound on sound),delay effects such as tape delay, phasing effects and multitrack recording were among the first to attract widespread attention.

His innovative talents extended into his playing style, including licks, trills, chording sequences, fretting techniques and timing, which set him apart from his contemporaries and inspired many guitarists of the present day. He recorded with his wife Mary Ford in the 1950s, and they sold millions of records.

Among his many honors, Paul is one of a handful of artists with a permanent, stand-alone exhibit in the Rock and Roll Hall of Fame. He is prominently named by the music museum on its website as an “architect” and a “key inductee” along with Sam Phillips and Alan Freed. 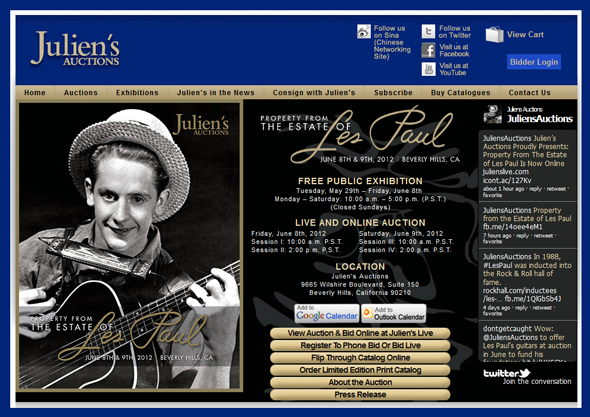 You can also view the flip catalog here: LINK

Below is the official press release for the sale event:

JULIEN’S AUCTIONS BEVERLY HILLS TO PRESENT AN ARRAY OF RARE AND UNIQUE GUITARS, EQUIPMENT AND PERSONAL EFFECTS FROM THE ESTATE OF THE FATHER OF THE ELECTRIC GUITAR, LES PAUL

Beverly Hills, California – March 26, 2012 — Julien’s Auctions, the world’s premier entertainment and celebrity estate auction house and the Les Paul Foundation have partnered for an auction of extraordinary property and collection of guitars, equipment and musical artifacts from the legendary musician, engineer and inventor Les Paul. The auction event will take place on June 8-9, 2012 in honor of what would have been Paul’s 97th birthday (June 9, 2012).

Les Paul, born Lester Polfuss in Waukesha, Wisconsin in 1915, was on his way to making his mark on the history of 20th Century music at an early age. He was born with an inquisitive streak that he described as, “…curiosity and I got a double dose of it. I’ve never stopped trying to figure out what makes things work or how to make things work better.” It was this curiosity that spurred his lifelong quest to find the perfect sound in his instruments, recordings and performances.

His efforts produced one of the first solid-body electric guitars, which went on to become one of the most widely played and recognized guitars in the world, the Gibson Les Paul. Paul not only revolutionized the sound of the electric guitar, but also the technology behind modern day sound recording. Les Paul pioneered innovative techniques with sound-on-sound recording and commissioned the first 8-track tape recorder, which would become the core technology behind multi-track recording still used today.

Paul was inducted into the National Inventors Hall of Fame for his achievements in 2005 and the National Association of Broadcasters Hall of Fame in 2006. Paul has also been widely lauded for his contributions as a performer and recording artist. The Rock and Roll Hall of Fame and Museum honored Paul at an induction ceremony in 1988 giving him the title of the “Architect of Rock n’ Roll.”

The Grammy Hall of Fame inducted Les Paul and Mary Ford’s recording of “How High the Moon” in 1979. Paul was also honored with the Grammy Trustees Award for his lifetime achievements in 1983 and with a Special Merit Technical Grammy Award in 2001. Paul received three Grammy Awards for Best Country Instrumental, Chester And Lester in 1976, Best Rock Instrumental, 69 Freedom Special in 2005 and Best Pop Instrumental, Caravan, in 2005.

The sale will include equipment, memorabilia, personal effects and instruments that span the entirety of Paul’s career from his days as Rhubarb Red to his weekly Monday night shows at the Iridium Jazz Club in New York City.

The collection of Les Paul has been curated in part by Dave Belzer and Drew Berlin, collectively known as The Burst Brothers, two of the most respected and recognized vintage guitar authorities in the world today. Both Dave and Drew have always shared a love of “Bursts”, the nickname given to Gibson Les Paul Standards built between the years 1958 thru 1960, and it was their love of these guitars that eventually led to them becoming known as “The Burst Brothers”. Their extensive knowledge of vintage guitars and amps, combined with their passion for playing and their talent for finding rare guitars have made them a trustworthy and reliable resource in the vintage industry. Dave and Drew have been an intricate part of building the vintage guitar collection for the Les Paul Estate auction with Juilen’s Auctions of Beverly Hills.

Registering to Bid
Registration is required to bid in this live auction and can be done in person at the exhibition and auction, or online before the sale at the JuliensAuctions.com Registration page to bid by phone, proxy or in person, or online at JuliensLive.com to bid live online, or by calling (310) 836-1818.