Julien’s Auctions has published the online catalog for their upcoming sale – “Sports Legends and Music Icons”, which will be held at their Beverly Hills gallery on Saturday, June 23rd for Sports and Sunday, June 24th for Music. 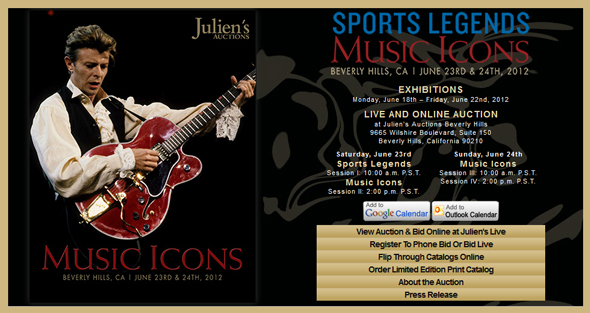 You can also view the flip catalog here: LINK

Below is the official press release for the sale events:

Beverly Hills, California — Monday, May 28, 2012 – Julien’s Auctions, the world’s premier entertainment and celebrity estate auction house, announced Music Icons and Sports Legends, an unprecedented collection of music and sports memorabilia being offered in a two-day auction, June 23-24, 2012. The historic collection of items to be auctioned include iconic pieces from contemporary stars of Rock-n-Roll to legendary icons and sports heroes who made history.

Also to be auctioned is The Rolling Stones’ Keith Richards’ famed “Hell” t-shirt which is being offered for the very first time from the often reclusive artist. The ripped sleeveless white T-shirt toured with Richards during the Rolling Stones 1981 American Tour and was often photographed. The shirt can also be seen in the concert film Let’s Spend the Night Together (Est: $1,000-$2,000). Other highlights among the hundreds of items being offered include a very rare opportunity to own pieces of Lady Gaga’s personal wardrobe. These include a stage worn vest designed by Vera Thordardottir that the mega-star wore while performing at Elton John’s 2010 White Tie and Tiara Ball. Also included is her skirt and blouse set, designed by Toon Geboers that she wore in London in 2010 and as seen in VOGUE Magazine.

Other highlights include a replicated J-45 guitar celebrating Buddy Holly’s 75th birthday (Est: $10,000-$20,000). A team of skilled artisans who worked with acclaimed luthier Alister Atkin built the rare acoustic guitar along with artisan Susie Temple who replicated Buddy Holly’s own hand tooled leather case. The guitar is known as the “Listen to Me” guitar and was originally created by The Buddy Holly Foundation.  A very limited number were made and this is the only guitar being offered for sale to the public. The other guitars made are on legacy loan to guitar luminaries around the world. The rare guitar sale is a celebratory collaboration between Songmasters and the Buddy Holly Foundation that will benefit The GRAMMY Foundation’s GRAMMY Camps.

Also offered is Elvis Presley’s custom made jewelry including an E.P. pendant given to him on stage in Las Vegas in 1974. The stunning 14k gold medallion is accented with diamonds (Est: $25,000-$30,000). Presley was always known as being generous with gifts. When his Uncle Vester Presley commented on a ring Presley frequently wore, Elvis gave it to him. This ring made from a star ruby and diamonds is set in a typical gold setting that Elvis was known to love (Est: $10,000-$20,000). Other Elvis items include a classic Stetson fashioned hat made for Elvis and designed by Nudie Cohn in 1969 when he starred in the Western film Charro! (Est: $10,000-$12,000), an authenticated vial of hair from Elvis’ personal barber Homer “Gil” Gilleland (Est: $2,000-$4,000) and a very rare 1957 film of Presley performing at a Fort Wayne, Indiana concert giving a glimpse of Elvis’ early performances few fans have ever had the opportunity to see (Est. $2,000-$4,000).

More items include an Amy Winehouse personally owned Princesse Tam + Tim robe that the artist wore in her breakout video “Rehab” (Est: $15,000-$17,000), many antique furnishings and personal items from the home of rock-n-roller “Meat Loaf.” Many people would be surprised to learn that when the rocker is not on stage he is often found hunting down treasures in antique stores around the world. In addition to some of these treasures, fans will also have the opportunity to own his black, leather jacket worn for a public appearance with Cher on stage with Patricia Russo (Est: $1,000-$2,000) and signed tour road cases used for housing equipment on the road (Est: $600-$800). Over 100 items from the musician who made “Blinded by the Dashboard Light” a worldwide anthem will be offered during the sale.

And, as only an auction house like Julien’s can do, a curated collection of unique items from Michael Jackson dating from his earliest career to his final rehearsals will also be offered at Music Icons.  The assembled collection include Jackson’s APOLLO Theatre performance worn fedora (Est: $8,000-$10,000), a 1984 MTV Viewer’s Choice Moon Man Statue presented to Jackson (Est: $8,000-$10,000), Jackson’s handwritten “Morphine” lyrics (Est: $2,000-$4,000), a Michael Jackson signed drawing (Est: $800-$1,200), a handwritten note to Lisa Marie Presley by Jackson (Est: $800-$1,200) and many other items that include a history of both his personal and professional life.

For the serious art collection, a selection of Tim Wakefield’s popular artwork known as Soundwaves will also be offered on the second day of the auction. Wakefield’s art has spanned the globe and includes his own unique ability to digitally extract the actual soundwaves from a song and develop it on canvas before painting a unique color scheme. Each piece of art includes the original autograph and lyrical liners of a famous musician. From Sir Paul McCartney to The Killers and every artist in between, Wakefield has been seen on numerous international programs and collaborated with some of the world’s most famous musicians. Wakefield’s artworks are one-of-a-kind pieces, each created by him in his London studio.

Sports fans can feast their eyes on a collection of sports memorabilia featuring the biggest names in sports. From NASCAR to the Olympics and from yesterday’s baseball heroes to today’s basketball champions, the Sports Legends session of the event will no doubt score some of the highest marks of the season. The Sports Legends highlights include a Tony Stewart 2005 race used car hood signed by the racing champion (Est: $3,000 – $4,000), a Lance Armstrong 2003 Tour de France worn skin suit (Est: $7,000- $10,000) and a Tiger Woods worn and signed golf glove (Est: $2,000-$3,000).

Registering to Bid
Registration is required to bid in this live auction and can be done in person at the exhibition and auction, or online before the sale at the www.JuliensAuctions.com Registration page to bid by phone, proxy or in person, or online at JuliensLive.com to bid live online, or by calling (310) 836-1818.

About Julien’s Auctions
With expertise specializing in entertainment memorabilia, Julien’s Auctions has quickly established itself as the premier auction house in high profile celebrity and entertainment auctions. Julien’s Auctions presents exciting, professionally managed and extremely successful auctions with full color high quality auction catalogues unlike any other auction company. Previous auctions include the collections of Cher, U2, Barbara Streisand, the estate of Marilyn Monroe and many more. Official website is www.juliensauctions.com.