Grammy Award-winning artist Rihanna will be bringing her “Diamonds World Tour” to North America in Spring of 2013, and tickets are already on sale via Live Nation with additional special packages via VIP Nation.

Full details can be found on Rihanna’s official website, www.rihannanow.com: 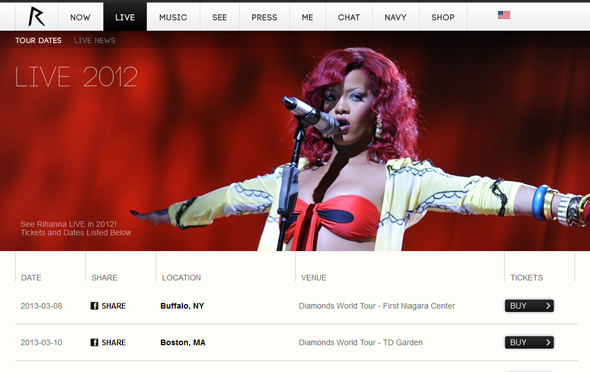 Below is a list of dates, as of the time of this writing:

As noted, tickets are on sale via Live Nation and VIP Nation.

I will be covering the San Jose date with photos and thoughts on the show.  I previously covered Rihanna’s tour that concluded at the O2 in London at the end of 2011, which is rumored to be released as a live Blu-Ray/DVD in coming months.  I also had the privilege to meet Rihanna after that show, as discussed in my article.

Rihanna also recently announced the release date for her upcoming album, Unapologetic, which will come out on November 19th worldwide.   This new album follows Talk That Talk, which will have come out about one year prior.  The new single, “Diamonds”, gives fans an idea of the current musical direction: