Bon Jovi will be touring North America starting in February, March, and April 2013.  Tickets officially go on sale tomorrow, November 30, though there is a special pre-sale from promoter AEG that starts today, and special VIP packages are also on sale.  This will be the first tour showcasing songs from the upcoming album, What About Now, due in the spring.  The concerts are comprised of special, multi-tiered pricing, including some tickets offered for under $20, with frontman Jon Bon Jovi wanting to make sure that everyone who wants to see them has an opportunity to buy tickets.

Tickets can be purchased via a special AEG Live-branded portal at Ticketmaster: LINK

Learn more about Bon Jovi, the tour, and their upcoming album on their official website, www.bonjovi.com: 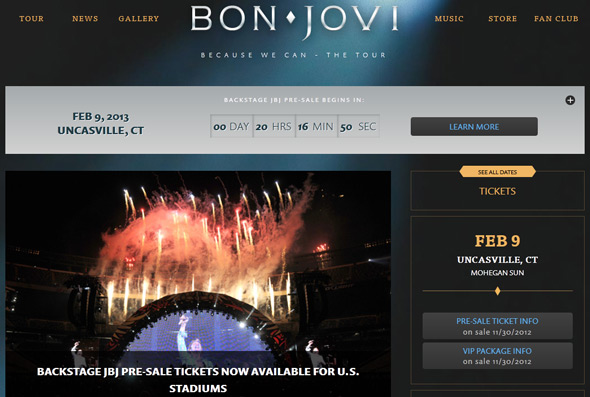 Below are the tour dates announced as of the time of this writing:

The following cities are also to be toured, with dates to be announced:

The Rock Subculture Journal will be covering the show in San Jose, California.