Imagine Dragons will be showcasing their amazing album, Night Visions, as part of their first headlining tour, which will travel across the United States and Canada during the Spring of 2013.  Tickets are being sold by Live Nation.

Full details and dates can be found at their official site, www.imaginedragonsmusic.com: 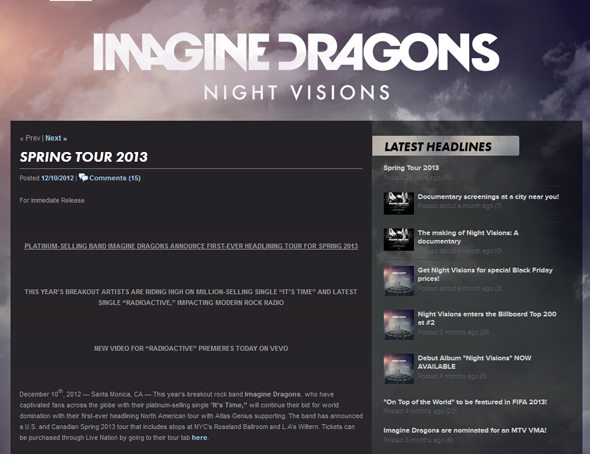 Below is the official press release from the band:

December 10th, 2012 — Santa Monica, CA — This year’s breakout rock band Imagine Dragons, who have captivated fans across the globe with their platinum-selling single “It’s Time,” will continue their bid for world domination with their first-ever headlining North American tour with Atlas Genius supporting. The band has announced a U.S. and Canadian Spring 2013 tour that includes stops at NYC’s Roseland Ballroom and L.A’s Wiltern. Tickets can be purchased through Live Nation by going to their tour tab here.

Imagine Dragons are touring in support of their full-length debut album Night Visions (KIDinaKORNER/Interscope Records) which debuted at No. 2 on the Billboard Album chart selling more than 83,000 copies — the best first-week sales for a full-length album by a new rock band since May 2006. Night Visions also climbed to No. 1 on Billboard’s Alternative Albums chart. In its review, Billboard said that Night Visions “delivers its share of high-gloss pleasures, including the beat-heavy ‘Bleeding Out,” the rousing ‘On Top of the World,’ and ‘Tiptoe,’ an appealingly mystical number…”

The success of Night Visions has been fueled not only by the band’s thrilling live show while touring the U.S. (with AWOLNATION) and overseas and high-profile TV appearances (The Tonight Show With Jay Leno, Jimmy Kimmel Live! Late Night with Jimmy Fallon), but also by the first single,“It’s Time.” The track is a multi-format hit at radio that has crossed over from Modern Rock to Top 40, Hot AC, and AAA and reached the Top 5 on Billboard’s Alternative and Rock charts after being used in a trailer for the motion picture The Perks of Being A Wallflower. Entertainment Weekly called “It’s Time” “a perfect misfit anthem,” while People Magazine dubbed it “an anthem with a rich melody that’s infectious but gritty.” Raved USA Today: “Imagine Dragons has learned to craft the massive choruses and propulsive rhythms needed to take a rock band into arenas.”

The second single from Night Visions is “Radioactive,” which is currently climbing the Modern Rock chart. The eye-popping video, which was directed by Syndrome (Eminem, Ke$ha, The Black Eyed Peas), premieres today on Vevo, and features actors Lou Diamond Phillips (Southland), Alexandra Daddario (Parenthood), and the puppeteers by the studio Puppet Heap (The Walt Disney Company, The Daily Show). The concept revolves around a mysterious female drifter who is on a quest to save her friends (Imagine Dragons) from the perils of a sinister, underground puppet-fighting ring.

The video can be seen here.

Rock Subculture Journal plans to cover the show at the Warfield in San Francisco.