Back in November, we reported on the news of the Alicia Keys 2013 Summer tour of Europe and England in support of her latest and fifth studio album, Girl On Fire, which went on sale late last year. The Grammy Award-winning artist has now announced a North American leg of the same tour, which will take place in March and April, and has been dubbed the Set The World On Fire Tour”. Full details can be found on her site, www.AliciaKeys.com, with links to buy tickets for all venues: 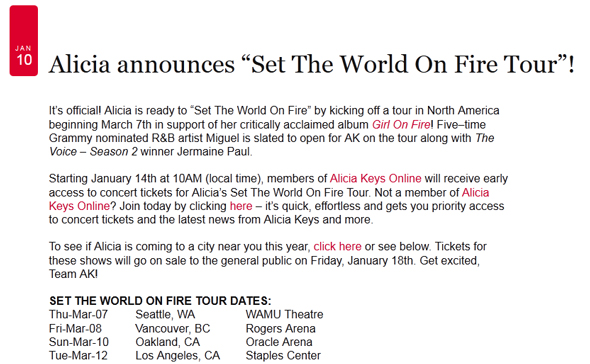 Below is the U.S. concert schedule:

Rock Subculture Journal will be covering the show at the O.co Coliseum in Oakland in March on the North American leg and again at the O2 in London in May on the European leg.