The 10th anniversary of The Caprices Festival in Switzerland boasts an amazing line-up of artists, which will perform over nine days, from March 8th through the 16th.  Included among the 50 artists are The Killers, Tori Amos, Fatboy Slim, Björk, The Kills, Nelly Furtado, Portishead, Black Rebel Motorcycle Club, Cypress Hill, and many others.  The festival is a huge attraction for music fans the world over, and it appears to be one of the best organized music events of its kind.  Renowned for its special atmosphere set within idyllic Crans-Montana, it is designed for concert goers from across the globe, the official site offers help with travel as well as special packages to take advantage of other attractions, such as skiing.

Full details in multiple languages can be found on the official site, www.caprices.ch: 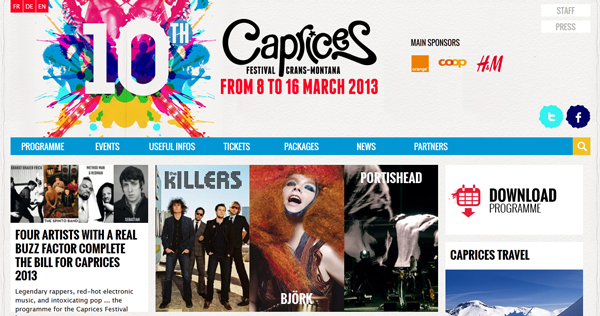 Below is the list of artists performing, announced as of the time of the publication of this article: