Pioneering alternative band Nick Cave and the Bad Seeds will set out next month on a world tour covering North America, the UK, and Europe.  In addition, their 15th studio album, Push the Sky Away, is due February 19th, and they will be holding a special concert at Fonda Theatre in Los Angeles with a YouTube webcast on the 21st.

Details about the world tour and new album can be found on the official site, www.nickcave.com: 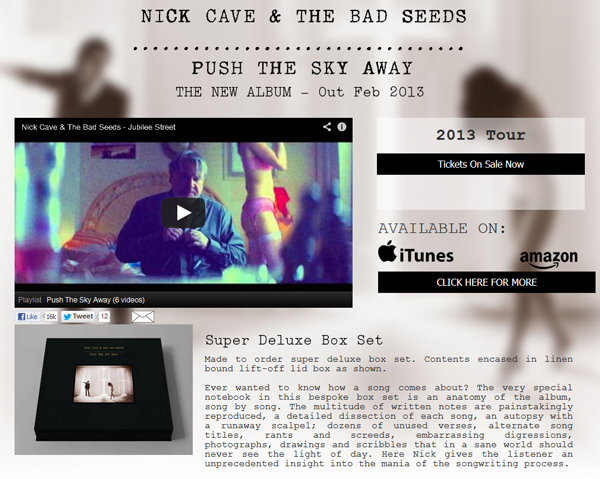 The new album can be previewed, track by track, at NPR.org.

Below is a list of the dates announced as of today:

Rock Subculture Journal will be covering the show in San Francisco.

Below is the latest official release about the tour:

Nick Cave & The Bad Seeds will tour the UK and European this autumn, kicking off on 26th October with two shows at London’s Hammersmith Apollo. The band have also added further North American dates in April. The first tickets will be available via an exclusive pre-sale at www.nickcave.com on Thursday 14th February.

Sharon Van Etten will be supporting at all the above dates, except Vancouver where the support is Basia Bulat)

Also  – A rare Nick Cave & The Bad Seeds’ live stream performance from the Fonda Theatre, LA on 21 February will be hosted on the newly launched Rockfeedback Youtube channel. This exclusive sold out show marks the release of the new album ‘Push The Sky Away’ worldwide.