Icelandic indie folk/pop group Of Monsters and Men have today added some more North American concert dates to their previously announced headlining shows at Red Rocks Amphitheatre in Colorado and at The Boulevard Pool at The Cosmopolitan of Las Vegas.  New shows go on special pre-sale this afternoon through Artist Arena.  Half Moon Run will be support on most of the shows.

You can go to the OMAM-branded concert ticket pre-sale page at www.artistarena.com for early ticket buying opportunities as well as special limited packages with merchandise: 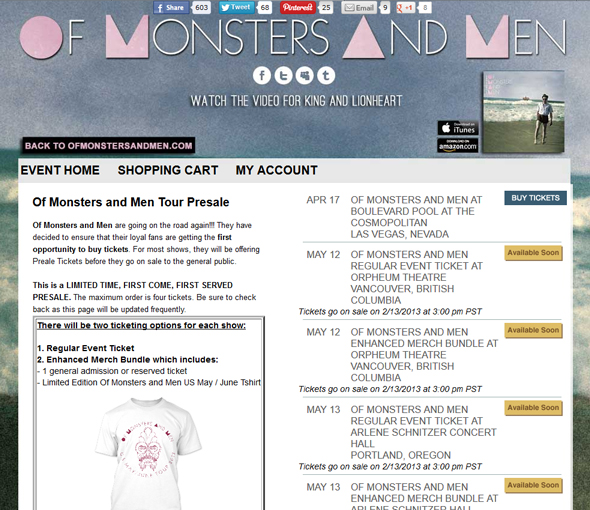 I also recommend checking out their official page at www.ofmonstersandmen.com and their Facebook page for the latest updates.

Below is a list of dates as of the time of this article:

^ with Half Moon Run

The band promise more dates will be added soon.

Rock Subculture Journal plans to cover the show in Oakland and possible Las Vegas as well.

I saw the band perform as part of Night 1 of Not So Silent Night last year (see concert review for many pics), and they were absolutely incredible.  I plan to see them as many times as possible this year – they are amazing.

In my 2012 Year in Review article, I named their debut album My Head Is An Animal the #6 best album of the year, and their song “Dirty Paws” the #9 best song of the year.

The band’s latest video – for “King and Lionheart” – was recently released via their YouTube channel: