Jay-Z and Justin Timberlake have today announced a stadium tour for North America as part of a “Legends of Summer” tour kicking off in July and covering a dozen cities in two months.  Special VIP tickets immediately went on sale via VIP Nation, with a broader pre-sale scheduled for Ticketmaster February 27th (code = LEGENDS).  There is also a Citi pre-sale and Official Platinum Seats sale currently going on via Ticketmaster.

The Grammy Award-winning pair will launch the tour in Toronto and play the remainder of dates throughout the United States.

The Rock Subculture Journal covered another joint concert tour by Jay-Z with Kanye West – “Watch the Throne” – in the UK last year.

I’m not aware of a public website for this tour as of yet, but there is a Live Nation group on Facebook with more information: 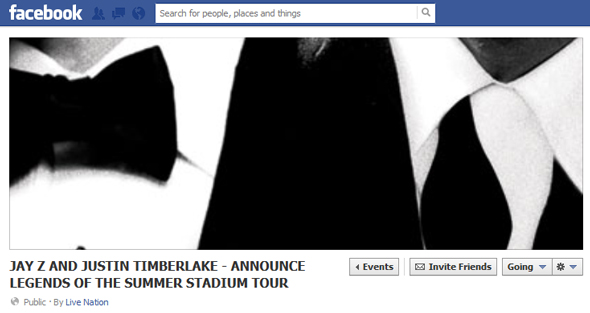 Below is the list of dates announced thus far:

Rock Subculture Journal will be covering the show in San Francisco.