80’s pop goddess Cyndi Lauper will be celebrating the 30th anniversary of her landmark album, She’s So Unusual, with a 22-date tour of the United States, along with an appearance at Summer Sonic 2013 in Japan afterwards.

Tickets are currently on sale, as is meet and greet packages, with all details at her official site at www.cyndilauper.com: 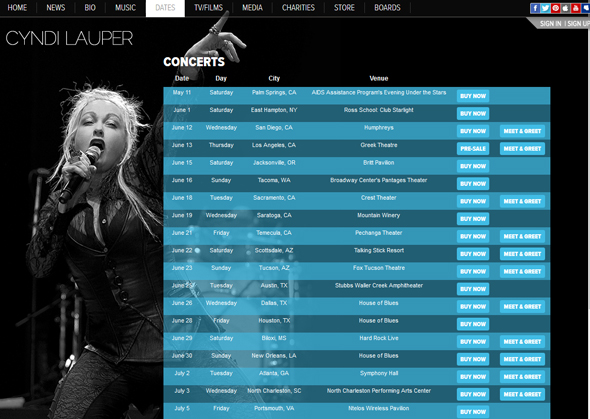 Rock Subculture Journal will be covering the shows in Sacramento and Saratoga.

Below is the official release about this tour:

Cyndi Lauper announced today the She’s So Unusual Tour to celebrate the 30th anniversary of her groundbreaking debut album. During the 22-date tour, which will kick off June 12th at Humphrey’s in San Diego, CA and wrap up July 13th at the MGM Grand at Foxwoods in Mashantucket, CT, Lauper will perform the record-setting album in its entirety. Select dates will also feature special guests Hunter Valentine. Visit cyndilauper.com or check local listings for more info and tour dates.“Cyndi Lauper sounds like no other singer on the current scene,” Kurt Loder writes in his original Rolling Stone She’s So Unusual album review. “Lauper’s extraordinary pipes connect with the right material, the results sound like the beginning of a whole new golden age.”

Recorded and released in 1983, She’s So Unusual, Lauper’s debut solo album, is a colorful portrait of a unique and multifaceted talent. The album features some of Lauper’s most well-known songs and perennial radio favorites including “Girls Just Want to Have Fun,” “Time After Time,” “She Bop,” “Money Changes Everything,” and “All Through the Night.” She’s So Unusual made Lauper a household name and also cemented her place in musical history as the first female artist to have four top 10 singles on a debut album. The release went on to sell over 16 million copies worldwide and won Lauper a Grammy® Award for Best New Artist.

“It’s been such an amazing year for me,” said Cyndi Lauper. “When I realized it’s also the anniversary of the album that started my solo career, I knew it was the perfect time to thank my fans for sticking with me through it all. I’m so excited to perform She’s So Unusual from beginning to end, song by song and I can’t wait to see everyone!”

Lauper is one of the most inventive and compelling performers in pop history, equally famed for her soaring vocal range, fiery personality and tireless advocacy work. The iconic performer has been celebrating a creative renaissance as of late. “Kinky Boots,” the Broadway musical Lauper composed the music and lyrics for, opened April 4th to critical acclaim, with the New York Times Ben Brantley raving, “This storied singer has created a love- and heat-seeking score that performs like a pop star on Ecstasy. Try to resist if you must… you might as well just give it up to the audience-hugging charisma of her songs.” The highly-anticipated musical is the Broadway adaptation of the British film “Kinky Boots” and is itself inspired by a true story about the power of acceptance. The show brings together an impressive team: Cyndi, legendary producers Daryl Roth and Hal Luftig, four-time Tony® Award-winner Harvey Fierstein (who wrote the book) and venerable director and choreographer Jerry Mitchell.

Last Fall she released her New York Times Best Selling autobiography, “Cyndi Lauper: A Memoir.” Written with journalist Jancee Dunn and published by Atria Books, the memoir details for the first time Lauper’s tumultuous years growing up in Queens, the ups and downs of a career that has spanned over three decades, her conflicted feelings on fame and her advocacy of equality for all that led to the creation of her foundation, the True Colors Fund. Earlier this year Lauper partnered with mega-producer Mark Burnett to star in her own We TV docu-series, “Cyndi Lauper: Still So Unusual” which gave viewers a backstage pass through her personal and professional life as she juggles her roles as rock star, mother, wife, Broadway composer, and philanthropist.

For thirty years, Cyndi Lauper has been dazzling—and surprising—her fans all over the world. A multi-talented artist and one of music’s most beloved icons, she has racked up global record sales of over 50 million (and 14 Grammy nominations) and has won countless awards, from a Grammy® and an Emmy® to numerous honors for her tireless activism through her True Colors Fund. Lauper has released 11 studio albums, with her most recent, the Grammy® nominated Memphis Blues, ruling the Billboard Blues chart for 14 consecutive weeks to become the best-selling Blues album of 2010. Overall, during her storied music career, Lauper has been nominated for 14 Grammy Awards, 2 American Music Awards, 7 American Video Awards and 18 MTV Awards.