New Wave icon Debbie Harry will be touring the United States again this year as Blondie, including Clem Burke and Chris Stein from the original line-up, as well as special guest X supporting.  The tour is promoting her forthcoming, as yet untitled album with the promise of ticket buyers being able to download five new tracks from the upcoming release.

More details can be found on the official site for Blondie at www.blondie.net: 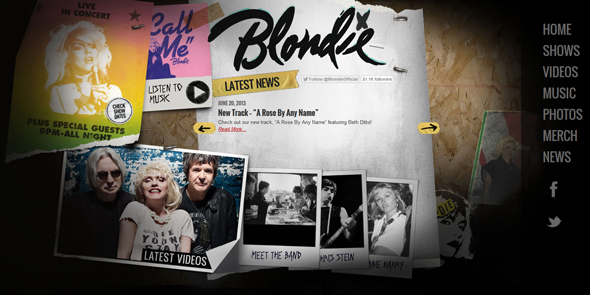 Below is the list of upcoming concert dates, current as of the date of this article:

The Rock Subculture Journal will be covering the concert at the Nob Hill Masonic Center in San Francisco (and covered one of her shows at Mountain Winery last year).

I purchased a ticket during pre-sale and after some correspondence with Ticketmaster, received an e-mail with a link to download the five free tracks.

Below is a press release about the tour:

(New York, NY – June 18, 2013) – Amidst the whirlwind of their current world tour, Blondie has announced that they will return home this Fall for their “No Principals Tour” with special guest X. Set to kick off September 5th, the band will hit U.S cities including Atlantic City, Washington, DC, Chicago, San Francisco, Anaheim, Austin, and Philadelphia before wrapping October 4th in New York City at Roseland Ballroom. Every ticket purchased for the tour will include five exclusive new Blondie tracks from the forthcoming album, due for release later this year. The song titles are: “Make A Way,” “Drag You Around,” “Can’t Stop Wanting,” “A Rose By Any Name,” and “I Screwed Up.”

All shows go on sale Friday, June 21st, with the exception of Riot Fest in Chicago which is on sale now, the Dallas State Fair show which is free with the price of fair admission, and the Nashville, TN show which goes on sale July 12th.

In 2011, Debbie Harry, Clem Burke and Chris Stein along with newer Blondie band members Leigh Foxx, Tommy Kessler and Matt Katz-Bohen – released their 9th critically acclaimed studio album Panic of Girls. Blondie was inducted into the Rock ‘n’ Roll Hall of Fame in 2006 and has sold more than 40 million albums worldwide throughout their storied career. 2014 will mark the band’s 40th anniversary.

X features the original line-up of John Doe, Exene Cervenka, Billy Zoom, and D.J. Bonebrake.  On September 3rd X will release a vinyl 12” four-L.P. Limited Edition Collectors Box Set with a booklet foreword authored by the late, great Ray Manzarek. It will feature Los Angeles, Wild Gift, Under the Big Black Sun and More Fun in the New World, two of which appear on Rolling Stone’s Top 500 Greatest Albums of All Time.