The Blu42 Sports Lounge in Walnut Creek will be hosting a special 80s event at their venue, with Martha Davis and The Motels, Bow Wow Wow, and Dramarama all performing in concert.  Martha Davis and The Motels will also be playing the Red Devil Lounge the following night in San Francisco, with Keaton Simons and DJ Dennis The Menace supporting.  They will also be playing a double header with The Bangles at the Los Angeles County Fair on September 2nd and one date in Florida and then an extensive tour of Australia and New Zealand in November and December.

You can keep up with the latest news about Martha Davis and The Motels on the official Facebook page and official website at www.themotels.com: 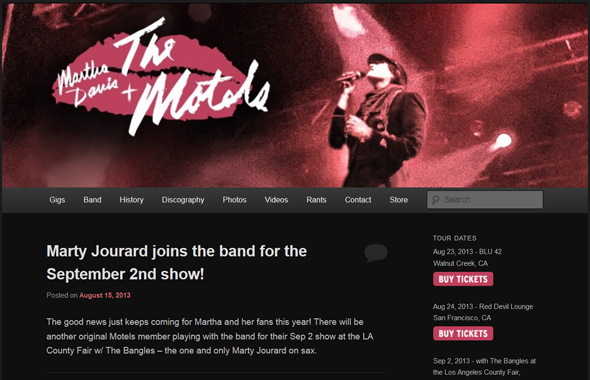 Below is the list of upcoming concert dates announced as of the date of this article:

The Rock Subculture Journal covered Martha Davis and The Motels and their appearance at Lost 80s Live at the Crest Theatre in Sacramento last year, and plans to cover the show at Blu42 Sports Lounge in Walnut Creek this week.  As mentioned in my past review, the set by Martha Davis and The Motels was the highlight of the night for me with that impressive, multi-artist line-up, so that was saying a lot given the talent that graced the stage that evening.