Music composer Danny Elfman will be playing a special engagement of his “Danny Elfman’s Music from the Films of Tim Burton” at the Nokia Theatre at L.A. Live on Halloween night.  The concert tour will debut in England starting at London’s Royal Albert Hall on October 7th, with the BBC Concert Orchestra.  Conductor John Mauceri will lead the Los Angeles show with the 87-piece Hollywood Symphony Orchestra and the 45-member Page L.A. Choir.  Elfman has provided the score for 15 Tim Burton movies, beginning with “Pee-Wee’s Big Adventure” in 1985.   Tickets are currently on pre-sale through AXS, with public sale beginning September 13th.

Prices for tickets range from $45 to $250 (the latter is for the “VIP Experience” and includes premium seating and an autographed poster).  The pre-sale password is “nightmare”.

It is said that music from all 15 film collaborations with Tim Burton will be featured, along with film clips and artwork.  The Grammy Award-winning composer is expected to perform (with vocals as Jack Skellington from The Nightmare Before Christmas) for the first time on stage since playing the final Oingo Boingo concert on Halloween in 1995 as part of the band’s Farewell Tour.

Below is a short video about the upcoming concerts: 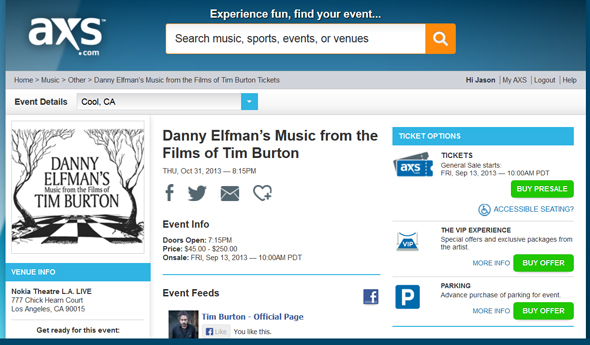 Rock Subculture Journal will be covering this event in Los Angeles on October 31st.  I was a huge Oingo Boingo fan growing up and saw them in concert at least a half a dozen times, including their final show at (then) Universal Amphitheater on Halloween in 1995, so it would be difficult for me to miss this one, as I am also a fan of Tim Burton going back to Pee-wee’s Big Adventure.