Alison Moyet, who is personally one of my all-time favorite vocalists, will be making just three concert appearances in the U.S. this year – two in California and one in New York – in support of 2013’s The Minutes.  The English singer-songwriter has published seven solo albums following her collaboration with Vince Clarke (Depeche Mode, Erasure) as Yaz (or Yazoo in the UK).  This is definitely one of the tours I’ve most been looking forward to all year, so I expect it to be amazing. I’ve been following her since the first Yaz album, but the only time I’ve ever seen her perform live was for the Yazoo Reconnected Tour in 2008.  I’ve thus never seen and heard her perform her own solo material, so I’m thrilled about that…

For more details about the new album and tour, check out her official website at www.alisonmoyet.com: 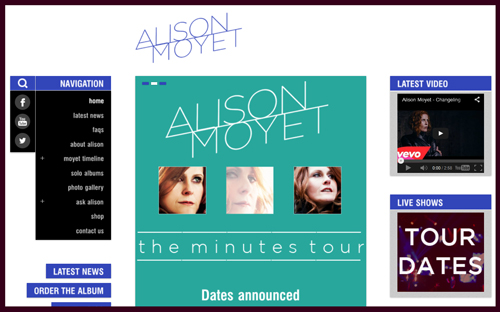