Award-winning English pop star Kim Wilde will be performing her first solo concert dates since 1986 next month.  With her Wilde Winter Songbook having been released this year, she will be kicking of her select dates of “Kim Wilde’s Christmas Party” on December 14th at Ankerhallen in Saasveld in the Netherlands, which will be followed three special O2 dates in the UK.  Supporting these special concert engagements will be Nik Kershaw.

Kim Wilde is well known for her 1981 New Wave hit “Kids in America” and her 1987 cover of The Supremes’ “You Keep Me Hanging’ On”.  Though she has been prolific in music with 13 studio albums, she has also found success as a landscape gardener and author.

Her new music video for “Hope” was released yesterday, and can be viewed below:

You can learn more about Kim Wilde, her music, and the upcoming concert dates at her official site, www.kimwilde.com:

You can find some additional information via O2: 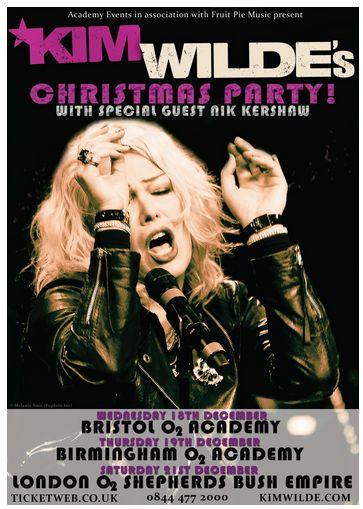 Below are the dates and cities for this special engagement by Academy Events in association with Fruit Pie Music:

Rock Subculture Journal will be covering the final show in London.