As is somewhat of a tradition, it was announced this month that Coldplay will be doing a special charity concert in London to benefit one of their favorite organizations, Kids Company, who provide practical, emotional, and educational support to vulnerable inner-city children and young people in London and Bristol.    The special event, “Under 1 Roof: A Night For Kids Company”, will be held on December 19th at Eventim Apollo in Hammersmith, London.  Joining Coldplay on stage will be Ricky Gervais, in character from The Office’s David Brent as David Brent and Foregone Conclusion, Lily Allen, magician Dynamo, and hip hop duo Rizzle Kicks, all hosted by Fearne Cotton.

Below is a summary of the event from the official Coldplay website:

Coldplay will be joined at Under 1 Roof by David Brent and Foregone Conclusion, Lily Allen, Dynamo and Rizzle Kicks. The evening will be hosted by Fearne Cotton.

This is the second Under 1 Roof concert, which is the flagship event of Coldplay’s ongoing relationship with Kids Company. The first U1R took place in 2011, when the band played London’s O2 Arena alongside Steve Coogan as Alan Partridge, Tinie Tempah, Rob Brydon and Emeli Sandé. That show raised more than £400,000.

Said Chris Martin: “Buying a ticket to this concert will guarantee two things: a totally unique never-to-be-repeated night of star-spangled entertainment, and money in the Christmas coffers of a charity that brings love and happiness to London’s most vulnerable kids.’

Said Kids Company founder Camila Batmanghelidjh: “When you feel happy your heart flips – Coldplay have made thousands of children’s heart flip not just through their music but through their kindness and support. The concert will bring together some incredible talent under one roof to help some incredibly courageous vulnerable children who are surviving their childhood so that they might have a brighter future.”

Tickets went on sale on November 14th and sold out in minutes, but you can find more details at Gigs And Tours and Eventim Apollo.

However, a small number of tickets were held back to be auctioned off, and there is still time to participate in this auction over at See Tickets: LINK

Two of the VIP tickets are also being raffled off on the official Kids Company website here: LINK

If you are unable to make the concert, you can still support Kids Company by making a direct donation.

Below is the official poster for this event (click for full resolution): 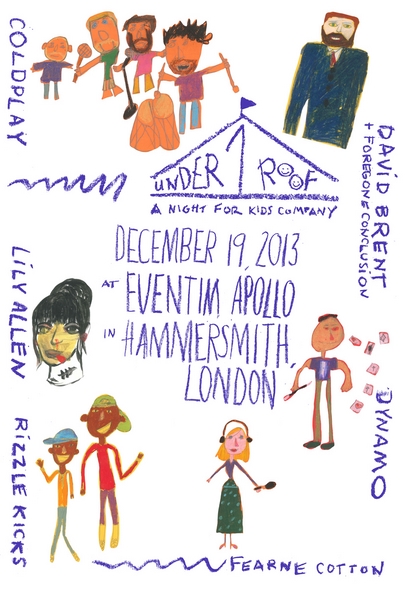 Fans interesting in this event should participate in the online discussion over at Coldplaying.com.

Rock Subculture Journal will be covering this event, and has worked with Kids Company before by participating in Coldplay’s “End of the Decade” sale in 2009 and winning Jonny Buckland’s “VIVA” guitar at auction, wherein 100% of the proceeds benefited Kids Company.   The following year, I was fortunate enough to attend the two “Hidden Gig” charity concerts just before Christmas 2010 in Liverpool and Newcastle.

You can check out past Coldplay coverage on the Rock Subculture Journal here:  LINK