Former Joy Division and New Order principal Peter Hook will be taking his Peter Hook & The Light across North America later this year, performing New Order’s third and fourth albums, Low Life and Brotherhood.  Currently they have plotted out 14 dates in Canada and the U.S. during the first three weeks of November.  The special tour promises to play many of New Order’s biggest hits produced during that period between 1983 through 1987, including “Confusion”, “True Faith”, “Thieves Like Us”, “Bizarre Love Triangle”, “The Perfect Kiss” and more, including B-sides.This tour will follow last year’s spectacular outing by the band, which covered New Order’s first two albums, Movement and Power, Corruption & Lies, which Rock Subculture Journal reviewed (see 9/27/2013 Concert Review).

As with last year’s tour, it is expected that Peter Hook & The Light will also serve as supporting band for themselves under a pseudonym, performing Joy Division material.

Full details can be found on the official site at www.peterhook.co.uk:

Below are the list of dates announced thus far:

The Rock Subculture Journal plans to cover the show at Mezzanine in San Francisco, just like with last year’s tour.

Below is the full, official press release distributed today:

“From Confusion To True Faith” ** 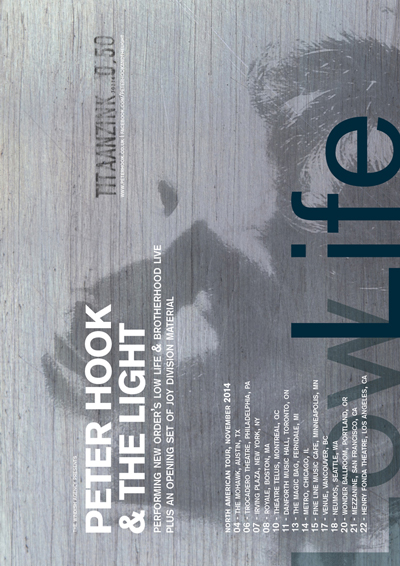 “This is New Order reinvigorated, reenergized; Hooky has arguably reclaimed the songs and is delivering them with heart and soul.” – Louder Than War

“Not only did Hooky and his band open the show with Joy Division songs, he proceeded to play New Order’s two full albums and a stellar encore. The real treat of the night was hearing New Order songs that have probably never been played” live or fans have never ever heard live….Hooky and his band really put 110% into this show.” – LA Record

Peter Hook & The Light are to perform New Order’s third and fourth albums, “Low Life” and “Brotherhood” for the first time in the United States and Canada across the first three weeks of November 2014.

The tour is the The Light’s fourth of North America following two very well received Joy Division album tours of “Unknown Pleasures” and “Closer” and their equally praised tour of New Order’s “Movement” and “Power, Corruption & Lies” in September 2013.

The concerts will include the singles and B-sides from New Order’s most prolific period. From August 1983 up to 1987, taking the audience from “Confusion” to “True Faith”, with both “Low Life” and “Brotherhood” performed in full alongside all the other tracks from that fans consider New Order’s greatest period including “Thieves Like Us” “Bizarre Love Triangle”, “The Perfect Kiss” and many more.

The Light will also be supporting themselves at the concerts performing a selection of Joy Division material prior to the album performances.

Having released “Blue Monday” and “Temptation”, by this period, New Order had grown in confidence and attained increasing success in the UK and internationally. Praised for their creativity, boundary pushing and consistent touring, the albums saw the group finding their niche and signature sound, fusing their rock, indie style with new emerging electronic equipment and bringing melody and emotion to their techno experiments. Both the singles and the albums for this period stand out as some of the finest work ever produced by the band.

Marking the high period of New Order artistically, the critical plaudits heaped upon “Power, Corruption & Lies” was followed by similar notices for “Low-Life” and “Brotherhood”, considered as a trio, the band’s greatest albums which were achieved through a period of intense hard work which brought significant results and advancements. Having raised their profile with “Blue Monday”, still the biggest ever selling 12” in history, the band continued to define their status with their diffident attitude to promotion, Peter Saville’s iconic design and their disregard of mid Eighties video culture and the MTV generation.

With FAC 51 The Hacienda Club open in Manchester, the band decamped to New York in 1983 to work with Arthur Baker, who co-wrote and produced the first two singles from the period “Confusion” and “Thieves Like Us“. Arthur famously dance floor tested “Confusion” prior to release in ‘The Fun House’, one of New York’s most famous underground clubs where the video was later filmed. The subsequent single became many fans’ favourite record, the effortless, timeless shimmering beauty of “Thieves Like Us”.

Releasing “Low Life” in 1985 alongside epic single “The Perfect Kiss”, whose 9 minute 12 inch mix, full of peaks and troughs is considered one of the best of the decade, the romantic club sounds of Low Life and its playful sense of humour has made many regard it as New Order’s most complete single album. Aside from the singles, the album contains many great records that have entered the canon, including “This Time Of Night”, “Sunrise”, “Elegia”, “Sooner Than You Think”, and the album’s closer “Face Up”, an energetic club track.

With the band now signed to Quincy Jones’ Qwest label in the States, they began to tour internationally to ever increasing capacities. Their transatlantic success underlined by the appearance of songs “Elegia” “Thieves Like Us” and “Shellshock” on John Hughes “Pretty In Pink” Film Soundtrack in 1986, as well as the uniquely stylised videos which accompanied the singles.

Coupling the release of “State Of The Nation” to “Brotherhood” in September 1986, the first single was superseded by the band’s biggest international hit since 1983, the musical landmark “Bizarre Love Triangle” which broke the band fully through to North American, international and even Australian audiences.

“Brotherhood” itself took a unique approach, splitting the rock side of the band to the first side of the album, with tracks “Paradise”, “As It Is When It Was” and “Way Of Life”, whereas the flips side was electronic, taking in the two singles and also “Every Second Counts”, a finely tuned electronic ballad regarded as the counterpoint to “Leave Me Alone”

With The Light’s concerts running up to 1987, New Order enjoyed their biggest international hit “True Faith”. Some seven years after the demise of Joy Division and a decade on from first forming, the band had come full circle to hit heights never thought possible, showing that “Dreams Never End”.

With a set list so full of classic records and fans favourites, many never heard for some twenty five years or more, this music defined the times and still sounds current today.

Peter Hook & The Light’s “Lowlife” & “Brotherhood” concerts chart New Order’s final stage of evolution from the post punk of Joy Division to defining themselves as electro pop pioneers at the cutting edge of the emerging club scene in the mid to late Eighties.

For videos and concert footage from The Light check –www.youtube.com/peterhookandthelight

“Realigned as New Order, they successfully adapted their trauma to the dance floor, where their deviant fusion of black-funk rhythm tricks and English avant-punk had resulted in stunning club hits like “Temptation” and “Blue Monday.” Low-Life, the group’s third album, caps its long, methodical glide into pop’s mainstream. “Love Vigilantes” and “The Perfect Kiss” both take full advantage of the remix lessons New Order learned under Arthur Baker, who produced its 1984 single “Confusion.” On Low-Life, New Order made the most of accessibility without compromising their past.” Rolling Stone

“Brotherhood is the last of the ‘old-guard’ of New Order albums but not their last good album. It contains the most complete synthesis of the band’s sound, which only really diverged after that point. The galloping, tinny riffage, the skittering hi-hats, the sunburst of keyboard swells, the melodies picked out on bass . . . They also cast off the last remaining traces of Joy Division here – Peter Hook says goodbye to his past on ‘As It Is When It Was’ with a cheeky little riff from ‘Love Will Tear Us Apart’.” The Quietus

On Peter Hook And The Light Live

“Say what you will about Peter Hook, the man has got balls….It was most enjoyable to revisit these albums….for those in the audience who had been too young or not even born when these albums were released, this was clearly a welcome opportunity to get the flavour of these musical riches in concert.” The Times

“Taking in the show, I could imagine that this is what it might have felt like hearing the original New Order playing that material back in the day.  More organic and authentic to the time. I really, really enjoyed this show immensely.” Rock Subculture

“Now, 30 years later, the songs really come to life with a punchier musical delivery than they ever had on record, and an uber-confident Hook belting them out. The most fascinating thing about the gig is hearing the journey between Joy Division and the classic New Order sound over the course of two hours.” Artrocker

“Hooky is the Rock God of bass players. His performance at Koko had far more energy than last summer’s Hyde Park show by the rest of New Order. He closed with a triumphant Temptation and the inevitable encore of Blue Monday. You’ve still got it, Hooky.” The Sun

“The show was an unquestionable treat for fans….Hooky is an outstanding bass player and it’s truly magical to see him live in action…..Don’t miss this tour if it’s coming to your city.  Peter Hook is a legend.” Hang The DJ / x89 Radio

“What Hooky has done is grab these songs by the scruff of the neck and give them a punkiness with his bass driving the songs with an added raw power. Tonight is a real triumph – everything was perfect from the venue, to the acoustics, to the delivery of the songs, to the tight band, to the vocals and that distinctive great bass playing…Hooky has made these songs have a very different narrative and put a whole new heart and soul into them.”  Louder Than War

About Peter Hook And The Light

Peter Hook And The Light features Peter Hook on vocals and bass, Jack Bates on bass, David Potts on guitar, Andy Poole on keyboards and Paul Kehoe on drums. Having first performed the Joy Division albums in 2010, the band have continued to perform the Joy Division catalogue. The Light also toured North and South America and the UK and Europe performing New Order’s “Movement” and “Power Corruption And Lies” in 2013. Plans for 2014 include European and Far East dates including the band’s first ever visit to China and festival appearances prior to the first “Low Life” and “Brotherhood” debut shows in September in the UK and the North American Tour in November.