As readers may or may not know, I own and operate the sister site to the Rock Subculture Journal, the Original Prop Blog.  Founded and launched in 2007, my Original Prop Blog site is all about film and television and important pop culture artifacts – finding them, authenticating them, preserving them, and everything that goes on in that specialized art market.  Today I have published a world exclusive feature that shares my video interviews with Colin Cantwell, who worked on many important movies and TV shows like Star Wars: A New Hope, 2001: A Space Odyssey, Close Encounters of the Third Kind, WarGames, Battlestar Galactica, and Buck Rogers in the 25th Century.  He is well known as the creator of the key ships and vehicles from Star Wars (like the X-Wing Fighter, the Y-Wing Fighter, the Tie Fighter, the Star Destroyer, the Death Star, the Landspeeder, the Sandcrawler, the Millennium Falcon, and the T-16 Skyhopper) by way of the prototype models he created for George Lucas back in 1974/1975.  But no one has really talked with him about his work since, so he has until now remained somewhat of a mystery to fans.  As it ends up, prior to doing those prototype models, he created concept art that has been lost to the “public record” for the film series until now…

So I would recommend that you check out my full article and videos over on my other site if you have any interest in Star Wars or any of the other films, as well as those with interest in NASA and the Apollo XI moon landing, as he was also involved in that historic moment in humankind.

You can check out my full article and over two hours worth of video interviews over on the Original Prop Blog by clicking through below: 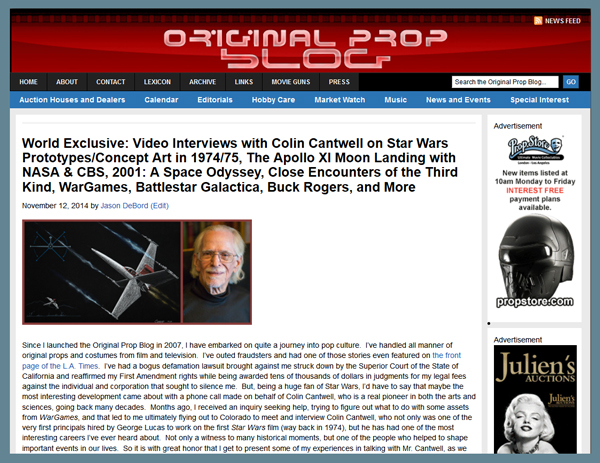