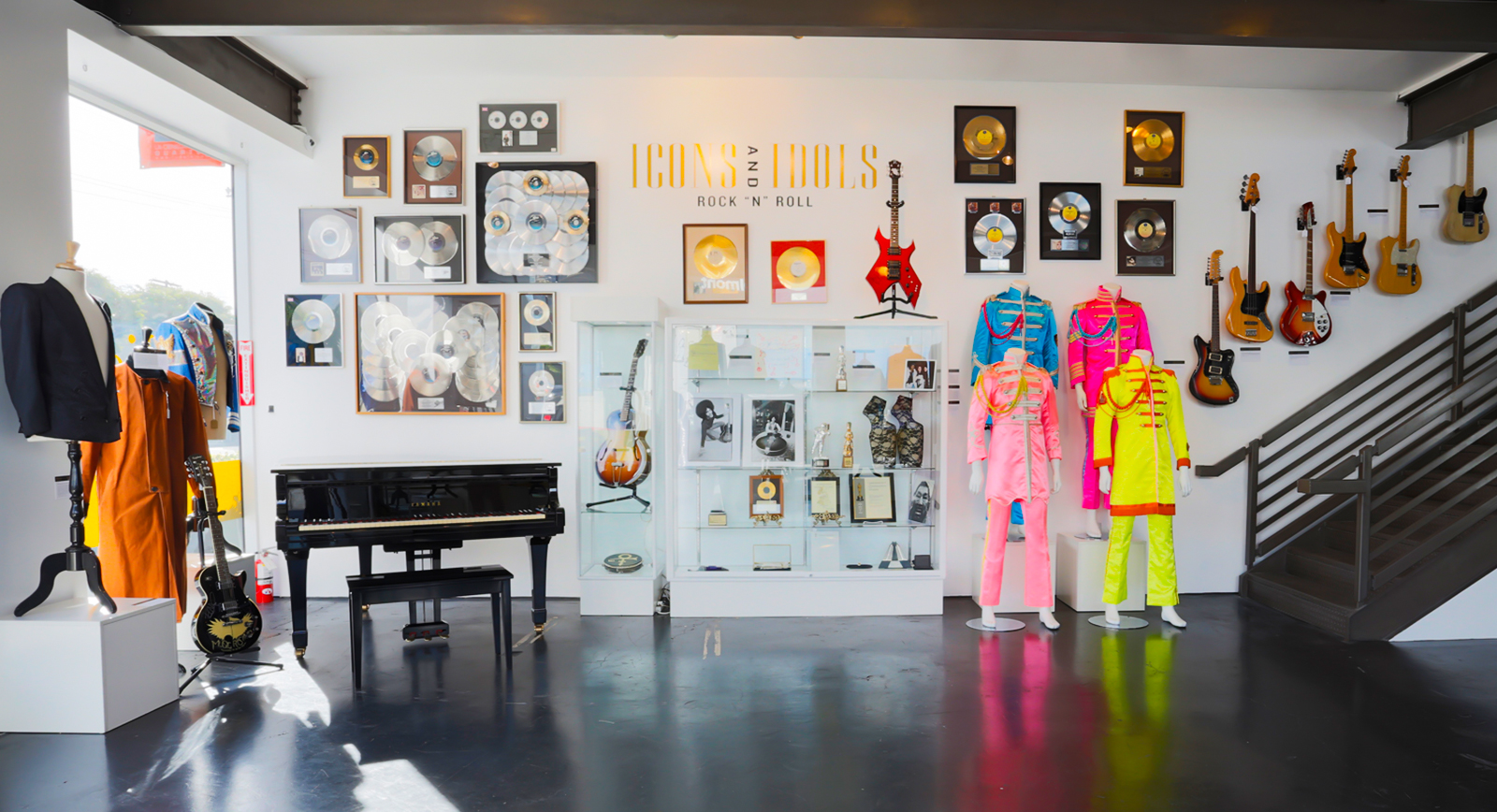 Greetings followers of the Rock Subculture Journal!  So I have big news today (with the official press release copied further below)…  I am as of today working full-time for Julien’s Auctions as their Director of Marketing, New Media, and Contemporary Pop Culture.  I am very excited about my new career with Julien’s and my future plans with the company.  For those that do not follow the auction house and collecting art market world, Julien’s Auctions is the premiere auction house in the world featuring Rock ‘N’ Roll memorabilia, such as stage and studio used guitars and other instruments, wardrobe, and other memorabilia.  They also specialize in Hollywood, Street Art/Contemporary Art, and Sports memorabilia.  I’ve been working with Julien’s for many years as a consultant, and I’m thrilled to be taking on a much bigger role with the company.

So what does this mean for the Rock Subculture Journal?  It will continue, though I will not be covering as many shows and events as in the past, which has already been reflected in the past six months or so.

If you read the press release, you will see that I have until very recently also been working as a producer for ABC Studios on the upcoming docuseries about film props and costumes, which will be exclusive to the Disney+ service. I had to keep confidential about this project until it was announced a few weeks ago, but that is why there has been fewer concert reviews on the site, as all of my time throughout 2019 has been dedicated to working on this series (which I have now personally wrapped on).

In any event, I appreciate all of the support over the years, and I hope it will continue.  I have big things planned with Julien’s Auctions, and in a few months, everyone will have a better understanding of this as our plans unfold.  There will be more announcements that will be of particular interest to my followers here in the coming months.

Los Angeles, California – (May 1, 2019) – Julien’s Auctions, the world-record breaking auction house and experts of contemporary and pop culture artifacts, has named collecting and memorabilia industry pioneer Jason DeBord as its Director of Marketing, New Media, and Contemporary Pop Culture. He brings over a decade of experience in building brands specializing in pop culture, fandom, and the collecting markets.

Since 2014, DeBord has managed social media for Julien’s Auctions and he will continue to build on those platforms with his newly expanded role with the company. DeBord has also provided targeted support with authentication and cataloging for unique artifacts and collections for Julien’s in the past decade, particularly in the areas of sci-fi and other contemporary genre films and television shows from the 70s through to today.

As Director of Marketing, New Media, and Contemporary Pop Culture for Julien’s Auctions, DeBord will be responsible for overall marketing, new media, exhibition management, and helping the company to build on their Hollywood and Rock ‘N’ Roll categories. DeBord plans to help expand into related market segments, leveraging his expertise in a wide range of collectibles and memorabilia.

Most recently, DeBord worked as a producer for ABC Studios on Cinema Relics: Iconic Art of the Movies (working title), a new docuseries that will be one of the debut original programs on Disney+ when the service launches in November 2019. The anthology series revisits popular films and brings new perspective to the props and costumes that made them unique. It will feature the artisans who created them, the actors who used them, and the collectors and archives that cherish what have become pop culture artifacts. DeBord contributed to the development of the series with host and Executive Producer, Dan Lanigan, over the past six years. His responsibilities included research, story development, and the identification of and outreach to the actors, designers, artists, and collectors featured in the series.

In 2007, DeBord launched the industry first Original Prop Blog website, which he created to benefit and serve the public interests of the art market by way of publishing articles focusing on news, research, opinion, editorials, and more. He has over the past decade strived to help fellow collectors and endeavored to bring a positive influence to the world of identifying, authenticating, collecting, and archiving rare pop culture artifacts. His work and efforts have been covered in the media by The Hollywood Reporter, Los Angeles Times, BBC, Daily Mail, The Guardian, Reuters, The Telegraph, Engadget, Antique Week, and more.

DeBord entered the Hollywood memorabilia art market as a television and movie prop and costume collector in 2002. He has been a fan of pop culture and collecting his entire life, growing up in a world of film and television, comic books and animation, and music and rock ‘n’ roll. It all started when he saw Star Wars in theaters at the age of 4, which kindled his desire in collecting anything and everything from toys and comic books to video games and memorabilia. He has attended San Diego Comic Con every year since 1987, networking with fellow “geeks” and comic book artists and writers. A huge fan of music growing up, DeBord also went to his first live concert in 1987 (for Run-DMC and Beastie Boys), which further energized his ongoing love affair and obsession with rock ‘n’ roll and popular music ever since.

A professional photographer, DeBord’s work has been showcased as part of the “Rock On…” exhibit at the Fresno Art Museum with legendary rock ‘n’ roll photographers Ethan Russell and Tom Gundelfinger, as well as at solo shows at The Press Club in Monterey and The Kennedy Gallery in Sacramento. In 2012, DeBord created the Rock Subculture Journal website, which publishes his own work as a photojournalist with original concert reviews and rock ‘n’ roll photography featuring hundreds of music artists including Fleetwood Mac, Aerosmith, Ringo Starr, Tori Amos, B.B. King, Morrissey, KISS, Rihanna, Depeche Mode, Billy Idol, No Doubt, Pixies, Jay-Z, New Order, The Cure, and more.

DeBord has worked as a licensed real estate agent and broker, served as Chief Operations Officer for The Broadband Group creating technology master plans for the premiere master planned communities throughout the U.S., and was Operations Manager for the non-profit ALL Student Loan.

DeBord has a Master of Fine Arts in Communication Arts from Loyola Marymount University’s School of Film and Television and a Bachelor of Arts in English from California State University, Sacramento.

“We are excited about Jason joining Julien’s Auctions, who brings his vast knowledge and fresh perspective to the marketing of the company,” said Darren Julien, President & CEO of Julien’s Auctions. “Since our inception, we have always been innovative in our approach to marketing and we feel that Jason’s creativity will help us continue upwards to being the leaders in this industry.”

“Julien’s Auctions was founded at about the same time that I became involved in the market as a collector and later a journalist, so I’ve watched as they have grown to lead in so many different market segments, particularly Hollywood, Rock ‘N’ Roll, Fine Art/Street Art/Contemporary Art, and Sports.” Jason DeBord continues, “In addition to finding and curating impressive collections for their auctions, they design unparalleled exhibitions, craft beautiful catalogs, and attract some of the best media coverage I’ve seen, which brings mainstream and worldwide attention to their events,” Jason DeBord added. “I’ve always been very impressed with their unique way of doing business and how their work celebrates pop culture. I’m excited to be given this opportunity to contribute toward their future success and to be part of this incredible team that brings such passion and innovation to the market.”

In 2016, Julien’s Auctions received its second placement in the Guinness Book of World Records for the sale of the world’s most expensive dress ever sold at auction, The Marilyn Monroe “Happy Birthday Mr. President” dress which sold for $4.8 million. Julien’s Auctions achieved placement in the Guinness Book of World Records in 2009 for the sale of Michael Jackson’s white glove, which sold for $480,000 making it the most expensive glove ever sold at auction. Based in Los Angeles, Julien’s Auctions has a global presence bringing their auctions and exhibitions to targeted destinations worldwide including London, New York, Las Vegas, Japan and China. Live auctions are presented for bidders on-site and online via live streaming video and mobile technology. For more information on Julien’s Auctions, go to www.juliensauctions.com. Connect with Julien’s Auctions at www.facebook.com/JuliensAuctions or www.twitter.com/JuliensAuctions or www.instagram.com/juliens_auctions.