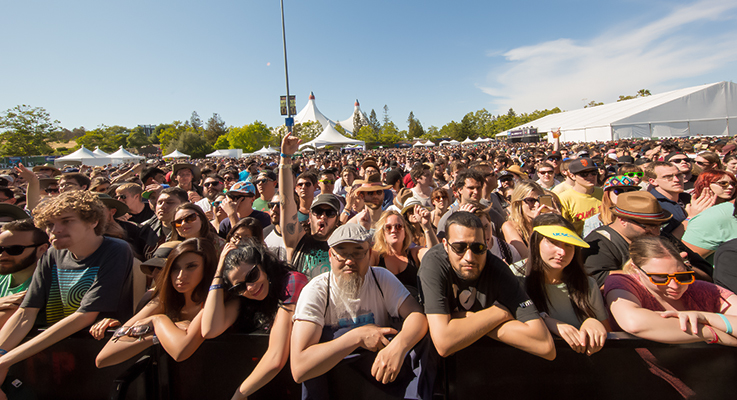 Last weekend was Live 105’s BFD 2015 festival at Shoreline Amphitheatre in Mountainview, California.  Representing the 21st time that this annual event has been held, it sold out in advance of the concert date on June 6th.  Live 105, “The Bay Area’s Alternative”, had a well curated line-up of known and emerging acts, covering a wide range of musical genres that all fall under the “alternative” banner, including 15 local acts.  With a vast line-up, they managed to squeeze it all into one day, with two “Festival Stages” that alternated back and forth throughout the day (to mitigate any downtime – it was literally non-stop music) as well as a “Subsonic Tent” and “Soundcheck Local Band Stage”, which ran concurrently.  It all lead up to the “Main Stage” acts within the Shoreline Amphitheatre itself, which ran back to back through the night.  A fantastic show that seemed to come off without a hitch, playing to over 20,000 fans.  This article features my PART ONE coverage, which focuses on the daytime “Festival Stage” artists and performances.

END_OF_DOCUMENT_TOKEN_TO_BE_REPLACED

Black Francis (AKA Frank Black, AKA Charles Michael Kittridge Thompson IV) usually has little to say to an audience during a Pixies concert, and unless I missed it, he had nothing to say to the sold out crowd at the Fox Theater in Oakland last night.  The music he crafted with his band, originating in the late 80s, still sounds ahead of it’s time, and rocks harder than most of the material put out by bands yesterday and today.  Yet in true anti-rock star style, after casually coming onto the stage Friday night and giving the crowd a friendly wave hello, Black Francis realized his shoe was untied and propped his foot up on the drum kit to rectify the situation before kicking into “Bone Machine”.  The band has one of the best collections of songs for a band with such a short lifespan in its original incarnation (1986-1993, more or less).  I personally love every song on their five studio albums, save one or two.  As most are fairly short, some are played even faster live, so a Pixies concert always feels like some kind of a race of sorts to the end, and thus the chit chat engaged in by some artists is skipped over completely with the Pixies, though they always have a surprise or two none the less.  The most unexpected moment with their stop in Oakland was the apparent lack of a set list, and after a satisfying encore, the house lights came up, band still onstage with fans exiting in a hurry, only to have the quartet break into a frenetic and rocking version of “Planet of Sound”, with house lights still up throughout.  Funny enough, I asked the sound and light crew at the mixing board in the back about this when the show finally (finally) came to a close, and even they were surprised.  In any event, a stellar show put on by one of my favorite bands of all time, played to a fascinating mix of fans old and new (some of the latter of which weren’t even born during their first run in the late 80s and early 90s).  A true celebration of some of the best music of my generation.  They’ve still got it. END_OF_DOCUMENT_TOKEN_TO_BE_REPLACED

“You’re singing the words to the new songs…  I can’t express… how happy I am that it touched you and connected to you… thank you for that… it’s the greatest feeling ever.”  Gwen Stefani taking a moment (one of many) to chat with her fans at the sold out show at the 6,200 capacity Gibson Amphitheatre in Universal City – the sixth of their “Seven Night Stand” special residency shows running late November through tomorrow.  Having recently released their first new album in 11 years, Push and Shove, the audience of mostly dedicated fans flocked from all over the U.S. and beyond to see this amazing band perform live truly better than ever.  In addition to putting on a phenomenal show, front woman Stefani took many moments to reach out to fans – sometimes literally – and all the members of the Anaheim band (Tony Kanal, Tom Dumont, Adrian Young, Stephen Bradley, and Gabriel McNair) seemed to be having the time of their lives on stage.  Hopefully this will serve as a prelude to a full tour next year, given the reception of these shows and the strength of the new album, which is fantastic.  Truly an epic night that will not be forgotten by those lucky enough to have attended this show or one of the others.