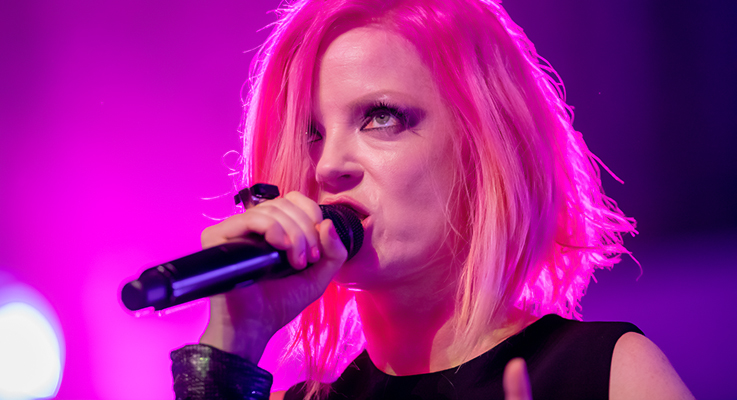 “…for those of you who haven’t been with us for twenty years, ‘welcome’.  Thank you for listening, and thank you for connecting with us.”  Shirley Manson of Garbage, talking about young people reaching out to the band, some of whom maybe weren’t even alive 20 years ago when they released their eponymous debut album.  20 years later, “connecting” has taken on a whole new meaning than it had in the mid-90s, as the Internet bounds us together in various forms and interfaces.  This new tour is all about that landmark and somewhat counter culture album, Garbage, which came out in deluxe, remastered, reissue versions spanning three SKUs across multiple formats on October 1st.  The “Super Deluxe Edition” features a whopping 62 tracks, including all of the B-Sides and remixes and demos galore.  The “20 Years Queer Tour” is a celebration of that album, playing the whole thing front to back with B-sides sprinkled within, as well as a few songs from later albums and eras.  The sold out show at the Fox Theater in Oakland on Wednesday night largely had a party-like atmosphere, as some fans spent the day waiting in line or participating in the Adventures in Wonderland add-on packages (which included swag, sound check viewing, meet and greets with the band, early entry into the venue, etc.).  Having turned out for several of the band’s shows as they’ve made their comeback in recent years, they seem to kill it in concert more and more, and the trend continues with this tour, as they stand with confidence on stage, bathed in red-hued lights and performing over a sea of mostly black attire clad fans with the occasional pink feather boa as added flair.  Even though they are looking backwards for this tour, they continue to move forward and it is an exciting time to be a fan of this band, who continue to reach up for their full potential. END_OF_DOCUMENT_TOKEN_TO_BE_REPLACED

Garbage is celebrating two decades since the release of their self-titled debut album with a U.S. tour coming in October.  The “20 Years Queer Tour” will see the alternative band playing their first album in its entirety.  That debut was released on August 15th, 1995, and included hits such as “Queer”, “Stupid Girl”, “Vow”, and “Only Happy When It Rains”.  The album went on to sell more than four million copies worldwide and garnered three Grammy Award nominations.  Leading up to the tour, the band will release a special remastered 20th Anniversary Edition of Garbage which will include remixes and previously unreleased versions of some of the songs. END_OF_DOCUMENT_TOKEN_TO_BE_REPLACED