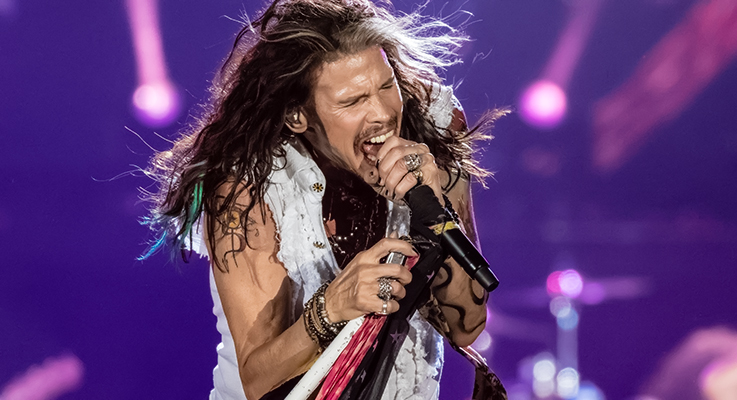 “Remember baby, the lake may be cold, but the light at the end of the tunnel may be you…”  The final words from the immortal Steven Tyler as he turned his back to the crowd and strutted topless down the ramp and into the bright lights glowing from the back of the stage, as “Bad To The Bone” played him out.  Performing at Harvey’s Outdoor Arena in South Lake Tahoe as part of their Summer Concert Series two years running, the explosive live show by Aerosmith kept a sold out crowd on their feet for over two hours.  In my own opinion, Aerosmith is not just the best live rock and roll band touring today, but maybe of all time.  They do pretty much everything better than anyone else, and they have so many hits in their arsenal that it just builds and builds and builds all night.  Steven Tyler was born to do what he does, and even at 67 years old, he does it like no one else (and last night appeared to be have more energy than any of the 7,000 people in attendance).  As much as he is the ultimate front man and performer, he is absolutely beaming when “Joe Fucking Perry”, “on guitar for 40 fucking years” is beside him, bringing the familiar riffs to life in a way that seems to be equal parts passion and effortlessness.  Their songs feel like they were made to be performed live, and maybe more than any other band today, they know how to put on a show that’s brilliant no matter where you are, from up close to far away in the bleachers.  Even if you are not a dedicated Aerosmith fan, I would say above any other band today – if you are a fan of ANY contemporary music – you’ve got to turn out to their show at least once, just so you have a new benchmark from which to judge all other concerts.  It really doesn’t get any better when you consider every critical element that goes into a live concert event.  They’ve earned the title, “America’s Greatest Rock and Roll Band”.

END_OF_DOCUMENT_TOKEN_TO_BE_REPLACED

Aerosmith’s “Blue Army Tour” series of concert events begins June 13th at the Gila River Arena in Arizona, and travels the United States and British Columbia well into August.  Four time Grammy winners, they are one of the most exciting rock and roll bands touring today.  They come armed with a ton of hits, old and new, that get crowds worked up into a frenzy.  Having seen them live before, I give it my highest recommendation if you can make it out to one of their upcoming dates. END_OF_DOCUMENT_TOKEN_TO_BE_REPLACED