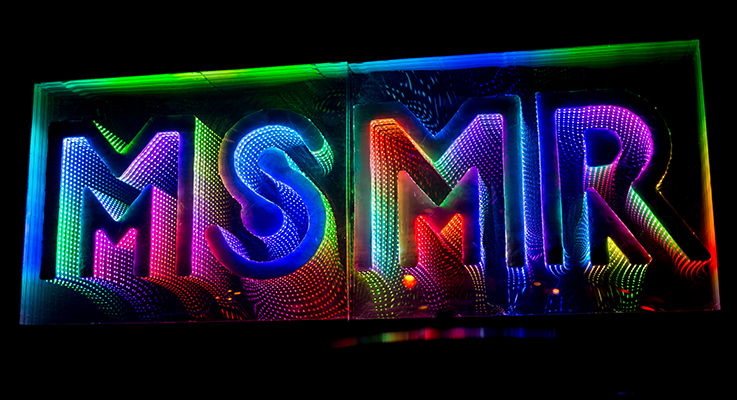 END_OF_DOCUMENT_TOKEN_TO_BE_REPLACED

“You’re one of the first cities that really, really supported us.” Lizzy Plapinger, the “MS” half of MS MR showering the crowd at the sold out Fillmore in San Francisco Monday night with some sincere gratitude.  I’d seen the break out duo twice at The Independent last year, and as their success continues, they have stepped up from supporting at the Independent, to headlining multiple shows there, to now headlining multiple shows at the historic Fillmore, where they opened for Marina and The Diamonds a few years ago.  As has been my experience seeing the band evolve, the “MR” half, Max Hershenow, seemed as thrilled as ever to step away from his keyboard a few times to dance and provide some backing vocals on Lizzy’s mic. I personally ranked their incredible debut studio album, Secondhand Rapture, as my favorite release of 2013, so they certainly won me over as a fan.  While they always sounded amazing live, they seem to grow in confidence with each new tour, while maintaining that humility and earnestness which is somewhat rare in the contemporary music scene.  This was their best show year, and while it clocked in at just under an hour, to me that was just perfect, and I applaud that they keep the studio length of the songs rather than trying to stretch them out to fill out more time as some young bands succumb to when touring with just one album under their belt.

END_OF_DOCUMENT_TOKEN_TO_BE_REPLACED

“Thank you so, so much for being here tonight.  It means so, so much to us.”  Lizzy Plapinger, the “MS” in MS MR thanking the crowd at the Independent in San Francisco last night for being “early adopters” of their music, while the “MR” half, Max Hershenow, preps the crowd for the last song of the night, “Hurricane”.  Appropriately enough, the new band has taken the music industry by storm with their phenomenal first studio album, Secondhand Rapture, which I certainly rank as one of the Top 10 Albums of 2013.  Their unique blend of at once dark and poppy electronic music has taken me back to those same feelings I had when I found Yazoo 30 years ago (with another male-female duo in Vince Clarke and Alison Moyet), though updated and reflective of our time today.  This was the third of three sell out shows at The Independent in the past week, which is remarkable since it was only four months ago that I saw them take the same stage supporting CSS back in June.  In much the same way Imagine Dragons graduated from The Independent (they played there as well earlier this year) to filling sports arenas, I suspect that MS MR will continue on with their upward trajectory, carried by their awesome music and brilliant live performances, which sound as sublime as the studio recordings.  This is definitely a tour that fan who are lucky enough to check out will not forget.

END_OF_DOCUMENT_TOKEN_TO_BE_REPLACED

It’s rare that audiences are treated to a real triple header concert, but that was my take on the female fronted trio of bands that owned the stage at The Independent in San Francisco last night.  How I ended up there…  I blame the Swiss (more on that later), but it was a real showcase of contemporary alternative bands that are making incredible music and bringing it on the road.  All three have also released amazing new albums this year (more on that later as well) and this material seemed to please the sold out crowd of 800 at the intimate Bay Area club.  They are all doing it again tonight at the Great American Music Hall, and I can’t recommend enough checking it out.  If they aren’t coming to a city near you, I can’t recommend enough picking up their albums, each released this year.  CSS’s Planta, MS MR’s Secondhand Rapture and IO Echo’s Ministry of Love are, for me personally, three of the best releases of the year, and there is a good chance all three will appear in my Top 10 Albums list for my 2013 End Of Year article.

END_OF_DOCUMENT_TOKEN_TO_BE_REPLACED

Today MS MR have released their debut album, Secondhand Rapture, and will continue their world tour with their own headlining shows as well as some dates supporting CSS and some festival appearances.  I am a huge fan of the New York-based recording duo of Lizzy Plapinger and Max Hershenow, and definitely count their new album among the best released in 2013.  CSS themselves today released their official video for “Hangover”, and will be touring North America in June and July, not only with MS MR but MNDR and IO Echo as well. END_OF_DOCUMENT_TOKEN_TO_BE_REPLACED