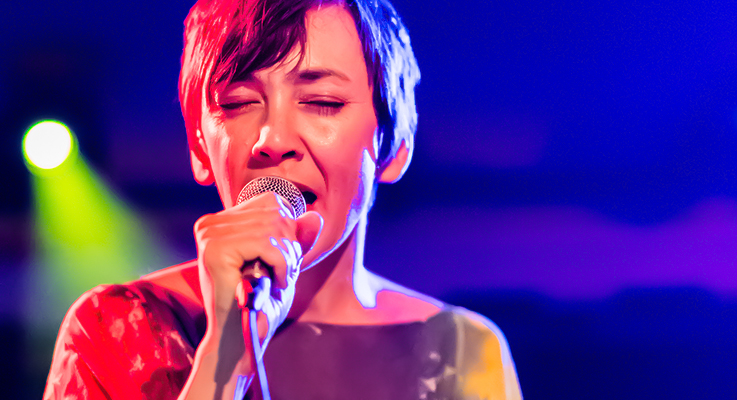 “Fuck you, Greg!  Just kidding!”  What the audience playfully shouted at Inara George of The Bird And The Bee (on cue and at her direction) as she recorded video of the crowd with a borrowed phone, to share with the other half of their duo who is not joining her on this short, rare tour hitting just four cities in the U.S. (Pasadena, San Francisco, Chicago, and Minneapolis).  Supporting their first all-original album since 2009 with the newly released Recreational Love, that crowd has certainly been waiting with great anticipation to see the act, in whole or part, for the better part of five years (in which time just a handful of dates have been played).  The packed collection of fans at Social Hall SF in San Francisco (just below and part of Goldenvoice’s Regency Ballroom) was not disappointed, as Inara George and her band played through The Bird And The Bee favorites, old and new.  Going by the quality and energy of the show, you wouldn’t know that live shows are not something that they do continuously, as it was a brilliant concert and the unique studio sound was recreated faithfully and, of course, at the heart of it all were Inara’s unique vocals.  Definitely worth turning out for one of these rare shows, and short of that, checking out the new album, which takes them in a new direction while retaining that unique distinct, singular, signature sound. END_OF_DOCUMENT_TOKEN_TO_BE_REPLACED